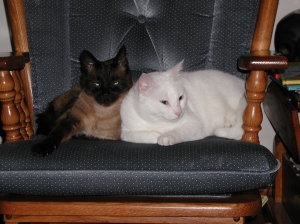 His name was Simon and he had gorgeous blue eyes.

Although this sounds like the start of a love story, it is not. I had just lost my beloved cat and was looking for a replacement at a local animal shelter.

A scruffy brown furball with beautiful eyes peered at me suspiciously–wondering why I would bother looking when no one else had taken him. He had been at the shelter for months and his companion had already been adopted. This should have been my first clue.

Once he got home, Simon promptly hid behind the dryer and refused to come out.

Simon eventually overcame his mistrust and was integrated into the family structure. He had some strange habits, especially his intense dislike of closed doors. No matter what, Simon was convinced that he wanted to be on the other side. This was manageable while we lived in our old, tiny house in town. It grew into a more serious problem when we moved to our newly-built farm house.

At the new house, I had worked countless hours to paint, varnish woodwork and add other finishing touches.  After cat tantrums resulted in scratches to my handiwork, Simon was moved to outdoor, farm cat status.

Simon was a capable, street-smart cat who had no trouble adjusting to living outside. He totally owned our rambunctious puppy and made sure the other farm cats gave him first dibs on the food. However, Simon still had his “grass is greener on the other side” mentality when it came to doors, and windows.

His first plan involved jumping as high as possible, digging his claws into my brand new window frames, and dragging himself up high enough to stare inside. I countered by splashing water on him through the window screen whenever he would try that stunt. 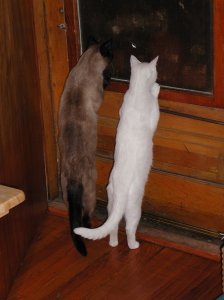 Plan B was to sneak in upon opening OR closing of the garage doors.  Anyone with relatively new doors knows how annoying it is to have a pet constantly setting off the detection system that stops the door and makes it go back up when anything breaks the light beam. We resorted to stationing the children to stand watch whenever we took a vehicle in or out.

Simon watched us intently when we walked in through the front door. The door “knob” included two parts. A semi-circle is grabbed with four fingers and above that is a latch that is pushed with a thumb. Pressing that latch and then pushing the door inward allows a person to enter the house.

Soon after Simon’s observations began, the door started to mysteriously malfunction. The human occupants blamed each other at first for not closing the door properly. (Ok, maybe the female human blamed the males…) The door was often found slightly ajar with furballs wandering in the house whenever we were not around or went outside for even a few minutes.

Once, we came home from church to find several cats and a puppy relaxing among broken cereal bowls. Apparently, bowls shatter when pushed over the edge of the table by kitties trying to lick up the last drops of milk.

Soon, we began to notice strange noises followed by kitties entering the house — while we were still inside. Detective work (one window above the kitchen sink allowed us to see the front door) uncovered the culprit. A psychotic cat with beautiful eyes was much longer and taller than our other farm cats. Tall enough, in fact, to reach the thumb latch on the front door and repeatedly whack at it with his paw. The other cats would all gather at his feet and push on the door until he hit the latch hard enough to open it. The merry band of burglars headed straight for the kitchen hoping that the breakfast cereal bowls were not yet cleaned up or other food was left uncovered.

This new discovery meant that the front door had to be dead-bolted at all times. Therefore, Simon developed a Plan D.

Another exterior door, leading into the garage, had a lever-type latch (rather than a round knob). The lever could easily be pressed hard enough by Simon to allow his accomplices to push the door open and enter the garage. The door from the garage into the house had the same latch, so they could duplicate their break-in procedure and scoot into the house.

I started to deadbolt the other doors. At this point, walking down the drive to get mail meant that I had to take my house keys and lock deadbolts if I wanted my house to be cat-free upon my return. When friends would visit, I greeted them at the door and promptly locked it after letting them in. At first, they all thought I was crazy, but after witnessing Simon’s door-opening skills, they finally believed me.

Unfortunately, this meant is was difficult to find a new home for my wayward furball.

I was completely exasperated by Simon’s Plans E, F, and G. The foam insulation on the coolant lines from the heat pump into the house apparently looked like a potential in-route to him and were shredded.  Weather stripping on every exterior door was clawed to pieces. I also had put away the screens on the patio doors after Simon climbed and put holes in them.

Simon’s psychotic behavior worked in reverse too. If he managed to hide inside the garage or house and we closed the doors, he tried to find a way outside. Climbing walls, running full-tilt at glass, and scratching at paint/varnish were all strategies to get past the dreaded closed door. I will shorten the rest of the story. We did find a new home for Simon (with full disclosure on his behavior). He opened their doors and wreaked havoc. He ended up at a neighboring farm where his days came to an abrupt end when he did not notice some oncoming traffic. He was around 10 years old.

Rest in peace blue eyes. You were a worthy opponent.