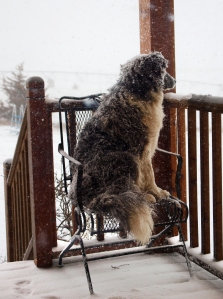 Almost two years ago, we adopted a puppy from an unexpected litter produced by our neighbor’s dog. When we went over to pick ours, one was aggressive and growly, compared to a bunch of other sweet, mellow fuzz balls.

I saw that attitude and had visions of a useful, cattle-herding dog and fierce protector for our sons as they wandered through the trees and mudholes around the ranch.

Reality: Neither of the above.

The lack of development into ‘useful cattle dog is not a surprise. Hubby and I have ZERO dog training skills and the idea that puppy would accidentally figure out how to herd cattle was probably a bad plan from the beginning. She is, however; quite adept at herding cats (useful skill for Superbowl commercials). This should have been our first clue at her identity crisis. Spoiler alert: She thinks she is a really big cat.

Fierce protector. The word ‘fierce’ is a bit strong. She is definitely ‘enthusiastic’. She bowls over visitors in her eagerness to be sure they notice her. (Sorry, UPS delivery guy!). She also barks at imaginary squirrels…OFTEN.

Somehow, we gave her the impression that barking and chasing critters was a good thing. Our praise has caused her to run and bark every time we walk outside or drive onto the yard. Her act extends into the wee hours of the morning….standing under our bedroom window at 3 a.m. *sigh*. Of course, the non-imaginary critters that actually killed chickens went unnoticed…

Puppy spends most of her time hanging around the yard with several lazy cats. These same furballs have been her constant companions since she arrived at our place two years ago. She has developed a surprisingly close relationship with them; to the point of convincing me that she thinks she is a big cat. Despite her tendency, as a puppy, to use the cats as chew toys (we also once rescued a very soggy chicken from her grip), she seems to really like her furry buddies. Consider the following: 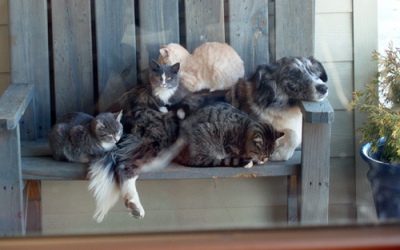 There you have it. All of the ingredients needed for your very own useless ranch dog. If you have suggestions to add, comment below!

10 thoughts on “How to Train a Useless Ranch Dog”